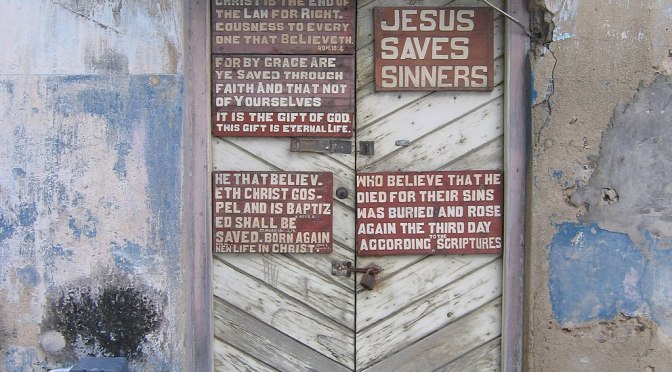 O God, from whom all good proceeds: Grant that by your inspiration we may think those things that are right, and by your merciful guiding may do them; through Jesus Christ our Lord, who lives and reigns with you and the Holy Spirit, one God, for ever and ever. Amen.

Today’s lesson is an interesting one in that it describes what would be the first of many confrontations that Jesus would have with the religious leaders of the day.  Jesus had recently called twelve young men who would be with him for the coming three years.  He had begun to travel about and speak in the synagogues in the various villages…and he had begun to heal people of a wide variety of illnesses and ailments as he moved about.

This morning Jesus has been confronted by some of the religious leaders who claim that he could only do the things that he was doing through the power of Satan.  They refused to acknowledge God’s power in what Jesus was doing.  Jesus had not only performed these healing miracles wherever he went, but he had done them on the sabbath.  Now a man could pull his cow out of a ditch on the sabbath without being questioned, but when Jesus had healed a man on the sabbath that had been considered work and everyone knew that work was forbidden on the sabbath.

Jesus had cast a demon out of a man and the religious leaders were incensed.  However, they weren’t so much questioning Jesus’ power over the demon as they were concerned with where that power came from.   Jesus replied to their questions by stating that he could only do what he was doing by having overcome the power of Satan.  His power came from God, not from Satan.

While the confrontation with the religious leaders was taking place, there were those who came and told Jesus that his mother and siblings were there to take him home.  Apparently, they were concerned about his safety knowing the power that the scribes and pharisees had over the people.  But, Jesus asked a rather strange question.  He asked, “who is my mother and who are my brothers?”  Then he turned to his disciples and said, “these are my family.”  I believe that Jesus was implying that spiritual kinship goes beyond flesh and blood.  I believe that Jesus would tell us that kinship comes from having shared common experiences and common interest.  This is especially true within the church.  It is when we come together as a worshipping family that our prayers become more vibrant and focused.  Our cares and concerns become more meaningful as we share in those things that we hold in common.

There was certainly a no more diverse group than the twelve that Jesus called to be his followers.  They came with different backgrounds, different educations, different opinions and different attitudes and yet they were bound together because they each recognized Jesus as their Lord and master.  True kinship also comes from sharing a common goal.  A congregation of people will never stand as one so long as they find themselves arguing over petty things that they may not share in common.

Jesus wasn’t disrespecting his mother nor his siblings with his reply, but merely letting everyone know that true kinship goes deeper and includes a desire to know Christ better and to bring others to that knowledge.

Our Old Testament lesson is a prime example of what can happen when God’s people forget who they are and “whose” they are.  The Jewish people wanted to be like everyone else.  They wanted a king and although Samuel attempted to dissuade the people by reminding them that God’s people were meant to be different, his arguments fell on deaf ears.

While David and Solomon were good leaders, following their reign the next 1000 years is a story of strife and upheaval.  The kingdom was divided, the people were taken captive, and the temple in Jerusalem was destroyed.   While the Israelites may have shared some common experiences, they failed to share a common goal of being faithful and obedient to their God.  And Israel still suffers because of that today.

May we learn from past and not make the same mistakes in the future.  I say that this morning and yet it would seem that as a nation we are determined to repeat some of the acts of the past that have proven to be unwise

Jesus has conquered Satan and he had exerted his power over Satan.   But you and I must acknowledge that fact and place our trust in his love and forgiveness if we are to witness his power in our lives.  Unlike the religious leaders of Jesus’ day, we have the Holy Spirit working in our lives and we know who is it that has the power to forgive sin and who it is that has the power to heal all men both physically and spiritually.

May we remember and trust in the words of the Psalmist who wrote, “The Lord will fulfill his purpose for me, your steadfast love, O Lord, endures forever” as we once again acknowledge that God is good…all the time.

An Act of Spiritual Communion

“My Jesus, I belie that you are present in the holy sacrament of your body and blood.  I love you above all things and I desire to receive you into my soul.  Since I cannot at this time receive you sacramentally, I invite you to come spiritually into my heart.  I embrace you as if you were here with me and I unite myself with you fully.  Never permit me to be separated from you.  Amen

A Prayer for the Church and Benediction:

Almighty and everliving God, ruler of all things in heaven and earth, hear our prayers this parish family. Strengthen the faithful, arouse the careless, and restore the penitent.  Grant us all things necessary for our common life, and bring us all to be of one heart and mind within your holy Church; through Jesus Christ our Lord.  Amen.

May the peace of God, which passes all understanding, keep your hearts and minds in the knowledge and love of God and of his Son Jesus Christ our Lord; and the blessing of God Almighty, the Father, the Son, and the Holy Spirit be among you, and remain with you always.  Amen.